Hydro-structure engineer Boriss Lobkovs is a legendary man, he has the information about all the hydro-technical objects and facilities built in Ventspils Freeport during the second half of the last century. He also supervised the construction works of buildings that were built later on and did not spare his advice during the recent reconstruction of Sothern Breakwater.

The scarcity of money and resources

The Head of Technical Department had to face several difficulties during his day to day work. The main problem was concerning human and logistical resources. ŌĆ£We were not granted the resources for major repair, so we had to find it by ourselves,ŌĆØ Boriss recalls. He notes that the ports enclosing structures (Northern and Southern breakwaters) could now be looking differentially as we know them today. ŌĆ£Affected by the force of nature and because of the damage caused by the World Wars, both breakwaters were heavily damaged and practically stopped functioning properly,ŌĆØ was mentioned in the records of Boriss Lobkovs, The Head of Technical Department, in the year 1987.

Stone chippings, stones and cement were needed to renovate both breakwaters. The stones were gathered from the kolkhoz fields, but the thought on using stone chippings had to be given up thus the breakwaters were subjected to further deformation. The rest of the materials were gathered using the connections with general contractor of the port ŌĆō trust BMGs. ŌĆ£We assigned them a floating dock and a diesel fuel. In return they shared with needed materials, including materials from a demolished building,ŌĆØ the engineer remembers.

Repair deepening works were also carried out at the port. Handling complex consisted not only from berths and their equipment but also from the canal and turning basin. The repair deepening works lacked financial resources, so these essential works were carried out using the in-house resources. ŌĆ£After putting another facility into service, I went to the Head of Finance Department and said :ŌĆ£You have a profit that is still going to be given to the ministry, better redirect it to the deepening works of the port bed,ŌĆØ And I signed an additional agreement with Baltmorputj Administration,ŌĆØ Mr Lobkovs says. Framework agreement with this administration provided continuous maintenance of ports depth.

The port grew and developed

Despite difficulties and problems, the economy in the 60s ŌĆō 80s grew rapidly. During that period other companies also experienced fast development, for example, oil handling terminal (now ŌĆ£Ventspils NaftaŌĆØ termin─üls), ports plant (now terminals of the chemical complex). During 1963 ŌĆō 1974 Ventspils port reconstruction took place which included the reconstruction of nine berths, potassium chloride transhipment complex, a four-storey general cargo warehouses and other facilities. Port specialists, including Boriss Lobkovs, had to coordinate the planning and construction of the sea part of these facilities.

As one of the most historic events of Ventspils port history, Mr Lobkovs considers putting a wave-protecting wall at Northern Breakwater into service. When the major reconstruction works of the wave-protecting wall took place a few years ago, Boriss could not resist and, together with the director of the construction firm SIA GTL Igors Z─ōni┼å┼Ī, went to the wall to make sure that his long-standing observations were taken into account in the new design.

Working on the project of Northern Breakwater

Boriss Lobkovs worked closely with the Leningrad Project Institute LenmorNIIprojekt, which projected nearly all hydro-technical buildings in Ventspils port. The above-mentioned Technical Operation Rules of Port Facility and Aquatorium were written by Boriss Lobkovs in cooperation with the chief engineer of LenmorNIIporjekt Mr Andrejevs. In Mr Lobkovs views these rules should also be used today in cooperation between the owners and tenants of port facilities. ŌĆ£The most important thing is compliance with permissible load standards of berths and warehouses, both covered and exposed. Failure in complying with these rules may result in deformation of the object and its structural elements, the emergency state of the machinery and other unpredictable consequences. At the same time, compliance with the rules guarantees the continuous use of ports full production capacity,ŌĆØ Boriss tells, stressing that this fact is particularly topical when taking into consideration the difficult geological conditions in Ventspils, where hydro-technical structures are built on weak soil, which can get trampled under pressure.

The engineer Lobkovs, participated in the study of possible options for the development of Ventspils port. ŌĆ£In the 70s, the issue of the construction of new ports was addressed. Latvian Shipping Company ordered a new port model in Baltics from the research station in Sochi,ŌĆØ Boriss recalls. Boriss Lobkovs participated in these studies. The port was planned to be built in Ventspils, North from Northern Breakwater. ŌĆ£A major development was planned for the enclosing structures and certain cargo terminals ŌĆō oil and chemical cargo, coal and metallic ore. This project still has not lost its topicality. In the management plans of port and city administration, it appears as a Northern Port.ŌĆØ

Boriss Lobkovs is indistinguishable from the fate of the port

The ports economy was essentially very connected and intertwined. Along with the state funding, the development and maintenance of many large port facilities were met owing to the profit of the entire Ventspils Sea Trade Association. Later, in the 90s, when this huge company started to share with individual independent companies, it was not easy to split the joint investment.

When the retirement years came, Boriss Lobkovs continued to work at the port being in charge of many job responsibilities. His experience and advice were helpful when the Ventspils Sea Trade Port got liquidated. The structural parts of the port holding were transferred to new companies established on the basis of the Commercial Port. This process included the technical operation of port equipment. These issues are still ongoing, notes Lobkovs. For example, he was involved in the first round construction to carry out technical supervision for mineral fertiliser handling complex, the grain terminal Ventspils Grain Terminal and the covered coal terminal Baltic Coal Terminal.

As mentioned several times before, the engineer followed closely the construction of the Southern Breakwater. Ventspils port hydro -technical structures, their history and operational regulations ŌĆō this is not just the nursling of engineer Boriss Lobkovs. As he himself admits, it is part of his essence, part of his self.

ŌĆ£I believe that all involved participants in the reconstruction and modernisation of port structures can be proud of their work, by speaking in the words of the German poet Goethe: "And the flow of time will not erase my footprints,ŌĆØ Boris Lobkov devotes these words to his generation as well as to his current, younger colleagues. 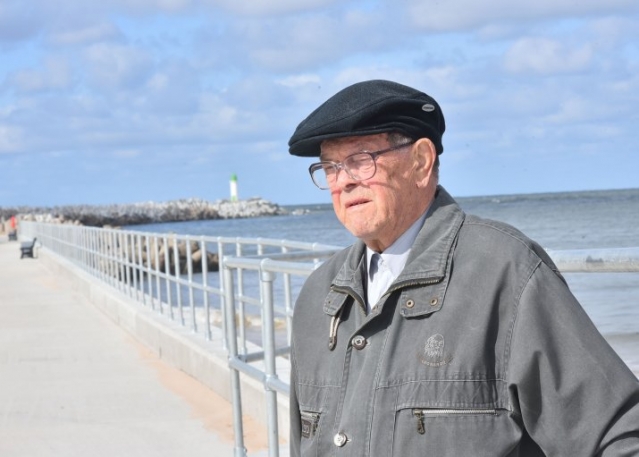 Boriss Lobkovs does not divide himself from the fate of the port and the establishment and operation of the hydro-structures. It's part of him. 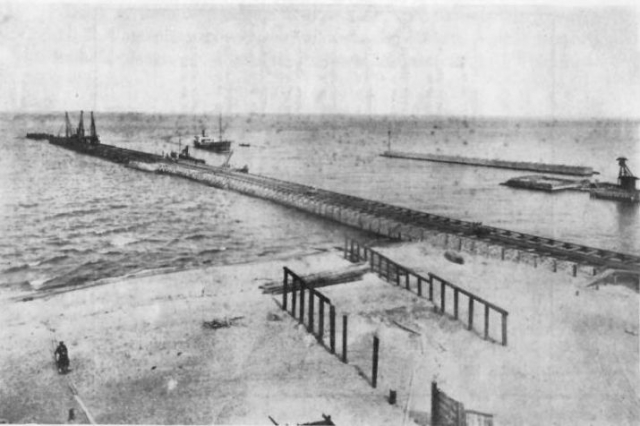 The Southern Breakwater during construction. The early 20th century. Completed in 1905. 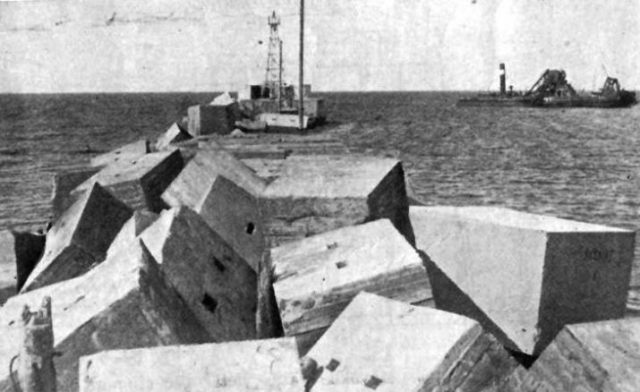 The Southern Breakwater in the 1930 s. The surface of the breakwater then was covered with concrete blocks.

The history of the enclosing structures of Ventspils Port

ŌĆ£Port-enclosing structures include Northern Breakwater of 2060m, Southern Breakwater of 1490 m and a wave-protecting wall of 330 m. The Northern and Southern Breakwaters were constructed between 1895 and 1905 and originally was a structure made of two interlocked fences between which granite rocks were packed. Due to natural conditions and the damage caused to them during both world wars, the breakwaters were severely damaged and largely ceased to perform their functions. The intensive construction of transhipment facilities in the pre-port required reconstruction and strengthening of these structures.

During reconstruction, major difficulties were experienced constantly due to a lack of materials, including stones and splinters. It was, therefore, necessary to look for substitutes whose extensive use also affected the construction profile of the enclosing structures. The main replacement was the concrete elements obtained by dismantling the port's old berths. In general, according to incomplete accounting, between 1970 and 1986, 7540 cubic metres from old structures were used for building new structures, thereby saving 3200 tonnes of cement and approximately 7000 cubic metres of granite ŌĆ”ŌĆØ