Hansa-Flex is helping to turn the telescope

The branch office of Hansa-Flex Hidraulika has been operating in Ventspils for 17 years, expanding its assortment and premises in Fabrikas iela 5 and creating many new workplaces for the inhabitants of Ventspils.

One of the oldest branches

The German company Hansa-Flex AG was founded in the year 1962 and opened its first Latvian branch in Riga, the year 2000. But now there are 16 more branches, operating in other cities of Latvia, including Ventspils, where one of the first branches began to operate and still does very successfully, offering various parts for hydraulic machinery, their installation and maintenance. Krists BńďrziŇÜŇ° who has been working in the Ventspils branch for 13 years and, currently, is the manager of the branch, tells us that in the beginning they were only three to four employees working in a small space which was enough for the circumstances in that moment. But, for the last three years, the company employs 14 workers: ‚ÄúWe are growing slowly but steadily. In the beginning, we worked in the room that was 200-300 m2, but now we are working in the space of more than 1100 m2. Of course, we also got kicked by the financial crisis but we survived it. This spring we expanded our premises for production and now we are renovating the warehouse for the employees to have more pleasant work environment. This is one of the leading companies in Europe in the field of hydraulics and we can say the same about Latvia, thus we do not have a shortage of work in Ventspils or in the rest of Latvia.‚ÄĚ

As Kurzeme has a relatively tight branch network of Hansa-Flex Hidraulika, they are focusing more on the Ventspils city and its region but they do not sort the customers. The company provides its services to both ‚Äď the biggest companies of the municipality and the region, and to farms, trying to help anyone in need. The customers are provided with 24-hour service, and there is a shop on the premises of the company. Mr BńďrziŇÜŇ° began his career in this company in Rńęga where he worked as a shop assistant for three years and received an offer to move to Ventspils, which he accepted: ‚ÄúI am an example of the progression of carrier because I really had the opportunity to go through all of the stages from the bottom to the top.‚ÄĚ

When asked to name the biggest clients of Ventspils branch, Mr BńďrziŇÜŇ° does not hesitate and names a really long list, but that is no it. Among named clients, there are large companies located in the territory of Freeport, such as Malmar Sheet Metal and Bucher Municipal, the largest taxpayer of the region ‚Äď Kurekss, Ventspils siltums, a few transport and road construction companies and farms. During these years Hansa-Flex has had the opportunity to work with the companies of several fields, and this cooperation will continue.

‚ÄúNot only can we distribute the necessary parts or equipment, but we can also install and operate it all. For example, we laid a hydraulic system for both of the city‚Äôs boiler rooms. If necessary, I can also go and help with repairing and other technical matters, so I do not come to work in a white shirt and tie,‚ÄĚ Mr BńďrziŇÜŇ° explains than in the case of need everyone is ready to help. The company produces hydraulic leads, cylinders and pipes on-site, and they also supply hydro plants, whereas, for example, they do not produce stock-produced pipes, which are not yet possible to produce in Ventspils, where there is no special folding equipment. The company order them from Germany in the needed quantity. There are seven people working in the production unit of Ventspils branch: welders, lathe operators and a worker who specialises in the repair of cylinders.

During all these years, the company‚Äôs employees had worked in many different objects, so now it is almost impossible to surprise them, even though new challenges are the most interesting part of their job. For example, Hansa-Flex Hidraulika was entrusted with dismantling and installation of the old rotating mechanism of Irbene‚Äôs radio telescope, which is also one of the most interesting projects. Mr BńďrziŇÜŇ° explains that it is very important to keep up with the newest tendencies and topicalities: ‚ÄúThe technology of hydraulics is developing rapidly, a lot of things are being computerized and we must develop with them. For example, the knowledge and skills, required in order to work with an excavator made in the year 2000, are very different from current requirements. We have excellent professionals, we have a great experience, and we can also consult with German engineers in more complex cases, so we are trying to find a solution in any situation. Hansa-Flex, who has established a special hydraulics academy, is also organising yearly training, which informs about all the actualities happening in Latvia and Germany.‚ÄĚ Although this is not the only kind of company in Ventspils, they are getting along easily, leaving the choice to the customers. To produce a hydraulic lead, the pipes need to be cut into the required length and peeled first. 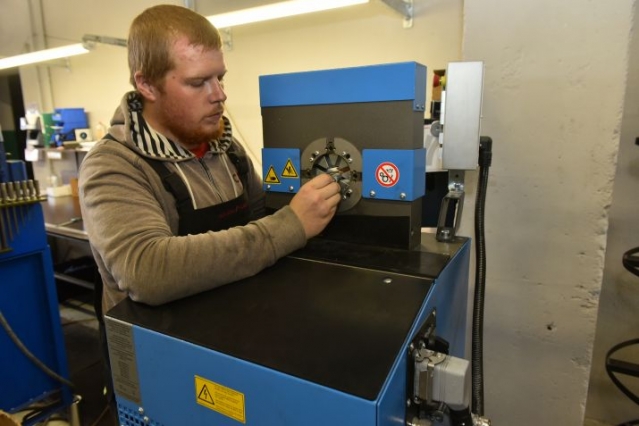 Then the required joint is added in a special press. 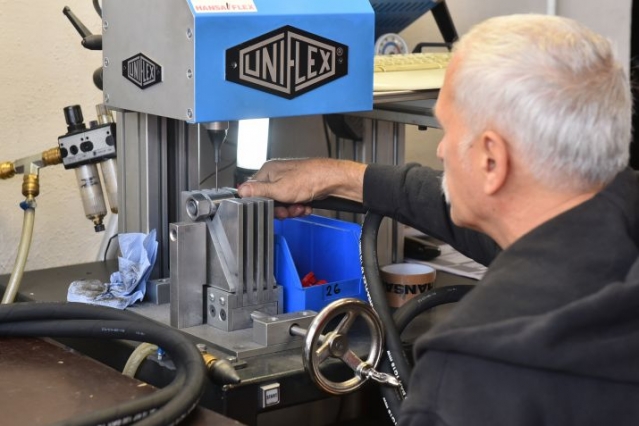 After manufacturing, the spare parts are labelled by engraving their number, date of manufacture and place. 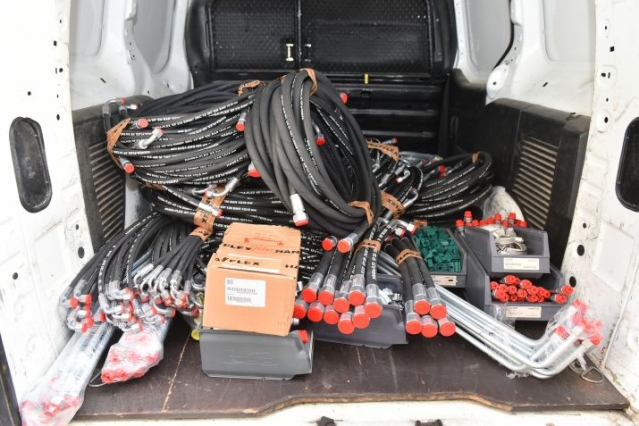 Production is ready to go to the client ‚Äď in this case to Bucher Municipal. 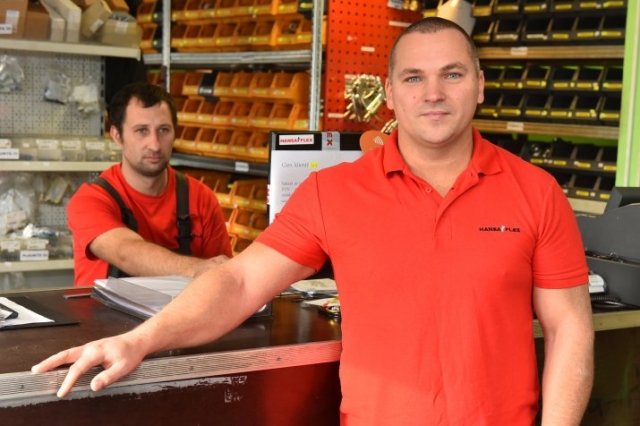 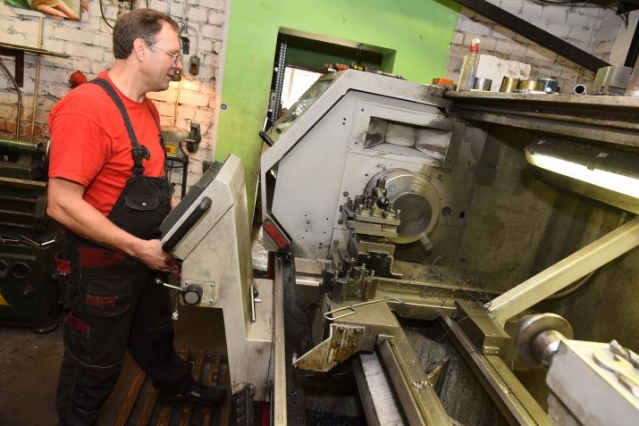 Many of the needed components can be produced in their own turning workshop.