Since the beginning of this year, in the industrial zone of Ventspils Freeport, established in the territory of the former fur-farm in Talsu iela 200, are now operating a cold store which is an indispensable help for the local fisheries.

Last year, Ventspils Freeport authority improved and landscaped a former fur-farm territory that was abandoned for almost 20 years in Talsu iela 200. Old buildings were demolished, the land was evened out and the first tenant of this industrial zone was found ŌĆō National Fisheries Producers Organization (NFPO). Last year, the tenant built a new cold store for the storage of fish products by attracting funding from the European Maritime and Fisheries Fund. It has been successfully operating for more than half a year, providing fishing companies with an opportunity to work more efficiently.

The cold store was built in half a year

In─ürijs Voits, the Chairman of the management board of NFPO informs that the new cold store is operating since January. ŌĆ£We built this cold store in six months for 3 million euro,ŌĆØ proudly says Mr Voits. The construction works began in May last year, but on January 5th, this year, the building was put into service. Mr Voits points out that previously, the fishery companies belonging to NFPO had difficulties with the deployment of caught production. For example, in 2017 the NFPO rented cold store premises in R─½ga, M─ōrsrags, Liep─üja and Ventspils, with the capacity of 2.5 thousand tonnes of fish. But now there is no need to rent premises and by reducing the number of expenses spent on rent, the fishermen managed to save 180 thousand euros. ŌĆ£Storing one tonne of fish now is more affordable than before when we were renting the cold stores and delivering fish all over Latvia,ŌĆØ says Mr Voits.

In the time span of six months, the new cold store has held 4544 tonnes of caught production. Currently, the available space for fish in the cold store is 1656 tonnes, as most of the output, or 2888 tonnes, has already been implemented. Fish, currently stored in the freezer, is intended to be sold within the next few months. Mr Voits adds: ŌĆ£Usually, it is considered that the maximum capacity of the project needs to be achieved during the third year. However, we have managed to approach this project's goal of maximum capacity in the first six months with 4.5thousand tonnes of loaded products.ŌĆØ In addition, special shelving systems are implemented in order to use the capacity of the cold store more economical and increase it to 5.5 thousand tonnes. From the six chambers in the cold store, two of them, currently, are equipped with the shelving systems and they are planned to be installed in the rest of the chambers. Each of the chambers is powered separately, thereby when reducing the amount of stored fish, each of the chambers can be turned off without wasting the electricity. As regards the volume of stored fish, it should be noted that fish frozen in blocks of 10 kg occupies less space of the cold store but fish frozen by one are higher quality and, accordingly, more expensive.

Currently, NFPO has twelve members, from which four fishing entities are using the cold store: Ver─Żi Ltd, BraDava Ltd, L─½cis 93 Ltd, and a fishing entity from Skulte. With the opening of the new cold store, the work of fishing entities has become more efficient. The representatives of fishing entities Ver─Żi and BraDava accents that the specific nature of the sector is seasonality. The best fish can be caught during winter, but it is important to store them properly until it is possible to sell them at a profit. The owner of Ver─Żi Ltd Ivars Janeks tells us that until now his company paid for the services of a cold store. Lately, the product types have changed and the capacity, needed for storing these products, has increased. ŌĆ£We use the cold store very intensively. It is very good that projects like these are realized,ŌĆØ says Mr Janeks, appreciating the modern and energy-efficient equipment of the cold store.

The Chairmen of the management board of the fishing entity BraDava Aleksandrs Blohins is very pleased with the new opportunity to use the cold store. ŌĆ£No one believed that we will be able to fill up the cold store but this spring it was full,ŌĆØ says Mr Blohins. ŌĆ£We need it because fishery is not predictable. We can work only seasonally. We have to work when we can but, unfortunately, not every time when we go in the see, there is a demand after our catch.ŌĆØ The fishing entity has also its own cold store in Ug─üle rural municipality but its capacity is smaller than the amount of caught production. Mr Blohins points out that, currently, in the market, high-quality fish are in high demand ŌĆō fish that are frozen separately. In Ug─üle cold store, 1000 tonnes of fish can be held frozen in the blocks but separately frozen, only around 300 tonnes. Additional space is required to ensure all requirements of the Food and Veterinary Service and so it would be easy to access every batch of production.

Mr Voits states that the fishery industry is experiencing economical booming. In 2017 the companies of NFPO have experienced 9 % growth, compering to the previous year, whilst the growth of other fishery entities in Latvia was only 3 %. The representative of Ver─Żi Ltd, Mr Janeks is not as optimistic and believes that there is a high degree of uncertainty in the field ŌĆō markets have been lost, in which the production of Latvian fishermen was previously realized and it is difficult to find new market opportunities. ŌĆ£It is all right for now,ŌĆØ Mr Blohins says, adding that the fishing industry is never predictable and completely safe.

Mr Voits adds that excluding the new cold store, NFPO is, currently, working on several other significant projects. For example, now a factory for fishmeal is being built in Bl─üzma, which is intended to be put into service in December, this year. ŌĆ£Fishermen will become more viable and competitive,ŌĆØ the Chairman of the management board of NFPO predicts. The new, modern equipped cold store can hold 5000 tonnes of fish. When the outdoor temperature is around 30┬░C, fish are stored at minus 24.5┬░C. 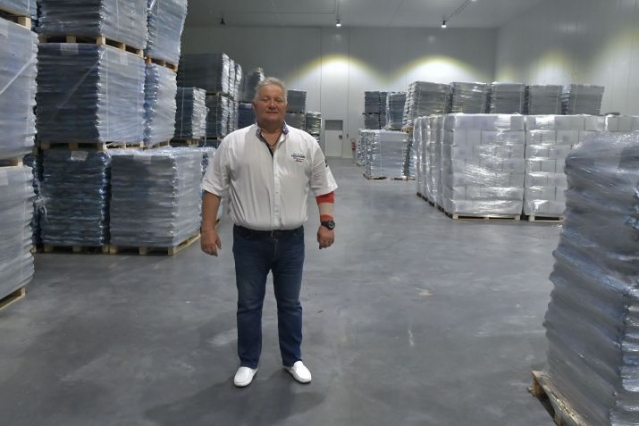 Currently, four fishery entities are used the cold store, including BraDava Ltd. The Chairman of management board of BraDava Aleksandrs Blohins points out that now they can work more efficient. 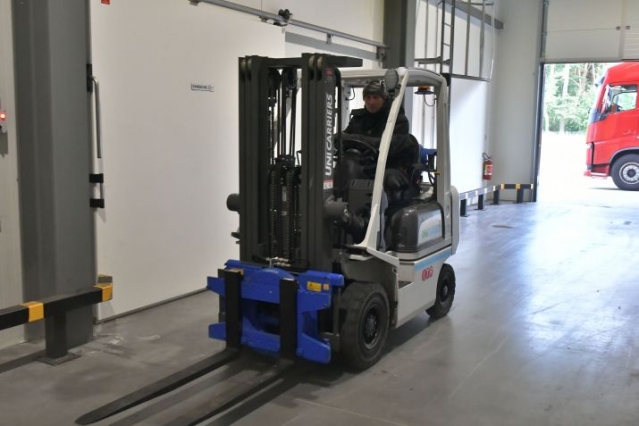 We can say only the best

Imants Sarmulis, Chief Executive Officer of the Freeport of Ventspils

Ventspils guests do not stop praising the neatness of the city. It really cannot be left unnoticed, but it does not apply only to the city centre. The local government is determined in planning not only the improvement of the urban areas but also the improvement and organization of the rural area. This also applies to areas trusted to the Freeport Authority for the needs of port and industrial development. One example is the 10 ha territory in Talsu iela, which had been almost completely abandoned for more than 20 years, has been changed and improved so ow it is unrecognizable. But the main purpose of development is to benefit the entrepreneurs. We are very pleased with the cooperation between the Freeport and the Chairman of the management board of National Fisheries Producer Organization In─ürijs Voita. NFPO is the first tenant in this territory and is developing successfully. Successful examples are crucial for attracting new renters, creating jobs for Ventspils local inhabitants and paying taxes to the city and state budget.