New rules have come into effect

Ventspils Freeport has become the first port in Latvia who has introduced a complex control system for the emissions of volatile organic compounds (VOC) and odours from loading oil tankers with petroleum and chemical products. Since June 1, 2018, new provisions are in effect in the area of Ventspils Freeport that stipulate that by loading petroleum or chemical products as well as mazut, crude oil and benzol into vessels whose vapour pressure (by Reid method) is 27,6 kilopascals and more (when tňö is 37,8 ňöC) the odours and emissions control system is implemented. Following this system, the VOC emission cannot exceed 10 g/Nm3 in the area of the terminal. The operator of the terminal, in which the handling of mentioned products are happening, monitors the odours and sends the data to the harbour master service. Whereas the operator of terminal unloading mazut from rail tank-waggon needs to secure that the odour concentration does not exceed 5 g/Nm3 in public places.

The odour control system is implemented

Ventspils Freeport has been working on this for a long time. One of the terminals, Ventall Terminal that is handling light oil products has been using this system since 2006, tells the Deputy Executive Officer of the Freeport of Ventspils Guntis Drunka. Ventaonjaks Serviss has also purchased the installations for odour and emission control. Moreover, the system used in the terminal, despite having been operating for 12 years, remains modern and effective as it provides a vapour clearance rate up to 10 g/Nm3 in the terminal area and a reduction in VOC emission by 90 - 95%, says Drunka.

Two more businesses, Ventspils Nafta terminal (VNT) and Ventbunkers had to set-up the vapour recovery units (VRU) and implement the odour control system in their territory until May 31, 2018. VNT set-up odour control stations and vapour recovery units within the limited time laid down by Freeport. Ventbunkers is currently in the process and promises to set-up the equipment until the end of the June. On June 1st the continuous monitoring system started operating, controlling both, the odours in the terminal and in public places and VOC emissions from VRU. The electronic ‚Äúnoses‚ÄĚ in public places has been installed on StradiŇÜa iela, Talsu iela 114 and at the city‚Äôs waterfront.

On a voluntary basis

The system of controlling odour and vapour emission from petroleum products is not a new invention, accents Druka. Recently he visited two EU ports ‚Äď Tallinn and Rotterdam studying overseas experience that has been used for around eight years. ‚ÄúI was very impressed by companies and terminals who were introducing this system voluntarily.‚ÄĚ

Each country has its own standards. We have a certain admissible level of odour and VOC emission, but in Estonia, for example, the standard is that the odour may not be disturbing, without specifying a certain limit. Whereas in Netherland the main criteria are locals‚Äô complaints, requiring companies to seek for more efficient solutions and invest in order to achieve the desired result.

The port of Rotterdam has installed around 350 electronic ‚Äúnoses‚ÄĚ that are owned by both private businessmen and the port administration. ‚ÄúWe have taken a big step towards the aim for our terminals not to be disturbing,‚ÄĚ concluded Drunka, expressing gratitude to all of the companies that did not spare to invest in this aim.

According to the new rules of Ventspils Freeport, the results of continuous monitoring of odour and VOC emissions must be reported at harbour master‚Äôs service. Data are received from nine stations or electronic ‚Äúnoses‚ÄĚ installed on terminal borders and in public places. The monitor shows graphics of the odour and VOC emissions actual level and timing in each of all nine stations. Port‚Äôs supervisor evaluates the obtained data and requires the terminal operator to take certain actions, including reducing the cargo loading intensity if the VOC limit or the concentration of odour on the terminal border or in public places exceeds the regulatory requirement.

If the operator of the terminal is not responding or the activities performed do not provide the desired results, the port supervisor shall inform the Regional Board of the State Environmental Service. The port supervisor Vladimir Macko tells us that cooperation with port terminals and National Environmental Services is currently under test mode. However, the first results have already been received and summarised.

Mocko points out that since the June 8, when it was nearly a week since the new Freeport rules entered into force, the VNT and Ventall Terminals, who already uses VRU‚Äôs, did not exceed the rules. But in the territory of Ventbunkers excess of VOC and odour concentration was monitored at the station near the railway platform where mazut was unloaded from tank-waggons into aboveground storages.

‚ÄúThe first observations suggest the need for the next step ‚Äď the installation of odour control systems and the installation of VRU in places where tank cars are being drained,‚ÄĚ tells Drunka. Specialists in Rotterdam are already developing a control system project for the Tallinn port. It should be mentioned that emissions and odour concentration is much lower when unloading tank-waggons than when loading vessels. ‚ÄúIf we succeed in disposing of odours when loading vessels, it would be a significant step forward,‚ÄĚ says the Deputy Executive Officer.

*Electronic nose ‚Äď an electronic device for detecting the odours. 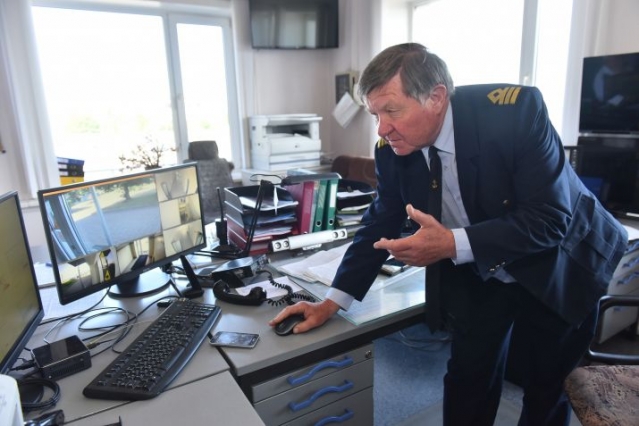 The port supervisor Vladimir Macko views the data on the monitor from nine control stations.

Who needs to be the controller?

We are all learning

The odour controlling and monitoring system has just begun to operate in the city. In our view, an obvious advantage of this system is that we can see a detailed layout of the actual situation. So far we had accumulated a lot of experience at the odour evaluation with sent. We are able to detect more intense and weaker odours but this evaluation will be supplemented with a detailed numeral outline. Since June 1, when the odour control system were introduced in the city, none significant violations have been registered. When we received one complaint about odours in a public area, the value, in this case, were two odour evaluation units, when the norm the norm is five units. Turned out that at this time in terminal Ventbunkers mazut was being unloaded from rail-waggons. We knew about the environmental impact of mazut unloading platforms already before and now we have the opportunity to also control its odour pollution. The system is flexible and it can always be supplemented with new electronic ‚Äúnoses‚ÄĚ. The Regional Board of the State Environmental Service is now working on a new collaboration with Ventspils Freeport Authority, introducing an odour monitoring system. Ventspils Freeport Authority also receives the results of monitoring. We agreed to exchange information and meet to discuss the most topical issues, if necessary. We are all only learning now.

The main purpose of odour monitoring is an early warning of any unpleasant situation in connection with odours. First of all, it is needed for the supervisor of the terminal to understand the possible consequences and needed actions. There are no additional legal obligations or functions imposed on us by the new port rules because the provisions of the Cabinet of Minister on odour control have not changed. We will, as before, react to complaints from citizens and draw up protocols as well as control the polluting activities of companies and follow whether the conditions of issued permits are met.

We are proud to contribute to the city.

During the last nine months, the VNT focused all its efforts on the construction of the vapour recovery units (VRU), to meet the official deadline (May 31, 2018) when the use of VRU became mandatory. During May, VRU were already operating in test mode, but now the VNT uses the VRU as an integral part of vessel handling. We are proud of the opportunity to be a contribution to the improvement of the city‚Äôs environmental standards and the well-being of the citizens. This achievement was possible only due to the inexhaustible efforts of our project team. VNT employees, contractors, and suppliers were successfully working side by side. We received the investment and equally high support also from other instances, such as the municipal government, Ventspils Freeport Authority, State Environment Service as well as from several Ventspils companies. VNT wants to express its gratitude to all the parties involved and especially its project team for the fantastic work! 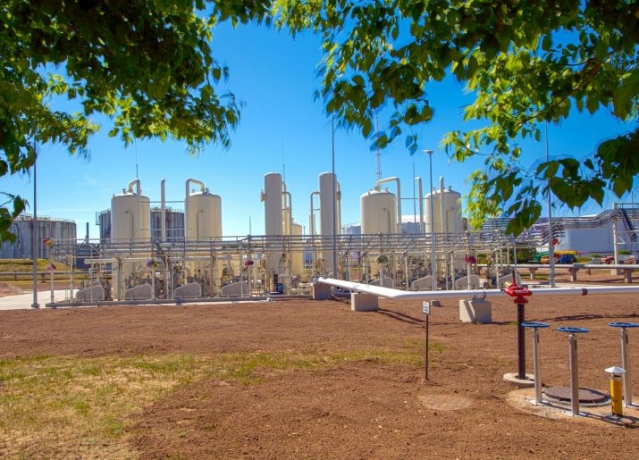